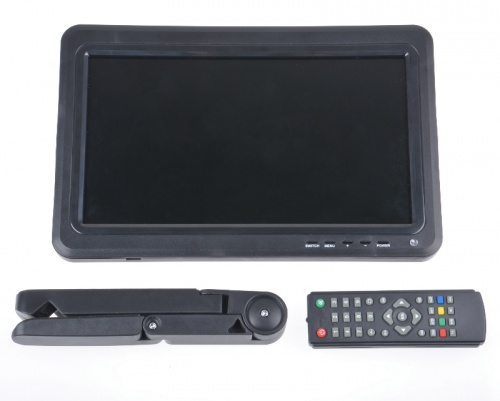 This is a 10.1 inch HDMI television with high-resolution built in 4W stereo speaker.
1366*768 resolution, high contrast, low power consumption; 16:9 widescreens; HDMI HD input interface, connected to the host PC via VGA interface can be used as a display;
definition interface can be used with DVD players, HDTV, car media connections as entertainment devices with high-quality display effect;
There's also a slot in the side for a USB stick. In theory if you put some MP3's, pictures or videos on the stick and plug it in you can use the display as a viewer.
There's some little buttons on the front that let you enter a menu system for adjusting brightness, color and contrast.
It auto-detects which input you have and switches to that one or you can 'select' from the menu which to display.
The + and - buttons on the front allow you to quickly change the speaker volume. Its not a HiFi but its fairly loud and good for movies & games.
Works great with a Raspberry Pi, as well as Xbox, Windows desktop and MacBook (with an HDMI adapter cable).
Some OS's such as Windows may require you to set the audio output to the external display but with the Xbox & Raspberry pi it immediately used the speakers without any poking or prodding.
For use with a Raspberry Pi we suggest editing config.txt to set the HDMI to the native 1366x768 in case it doesn't detect the resolution properly.
The easiest way to edit the config.txt is to put the Pi TF card into an every day computer and edit config.txt with any text editor and save.