A TPM is a cryptographic processor present on most commercial PCs and servers. Ubiquitous in nature, it can be used for a wide variety of use cases, such as storing keys for VPN access and encryption keys for hard disks, or preventing dictionary attacks to retrieve private keys. While a typical TPM provides several cryptographic capabilities, three key features are relevant for this post: 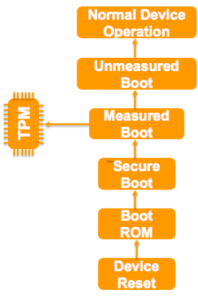 Typical sequence of a measured boot

A typical sequence of a measured boot is as follows:

In IoT solution deployments, it is important to check the identity of the device that is communicating with the messaging gateway. The usual method is to generate key pairs for the devices, which are then used to authenticate and encrypt the traffic. However, key pairs residing on the disk are susceptible to tampering. The TPM steps in here by storing the keys in tamper-resistant hardware. The keys are generated inside the TPM itself and are thereby protected from being retrieved by external programs. In fact, even without harnessing the capabilities of a hardware root of trust and secure boot, the TPM is also valuable just as a hardware key store. The private keys are protected by the hardware and offer far better protection than a software key.